I recently purchased a Dual Processor Quicksilver G4 running at 1000 MHz, and just finished accelerating it to 1200 MHz. Instructions, observations, and benchmarks follow.
This is the base configuration machine with 256 Megs of CL3 memory. All benchmarks were run under Mac OS 9.2.2 with virtual memory off, running all the 9.2.2 extensions, but no others. The monitor used for testing was an Apple 20" Multiscan (Trinitron CRT) set to 640 x 480 at 60 Hz with 256 colors with the default GeForce4 MX card.

Pictures of the top and bottom of the 1000 MHz G4 daughtercard are shown below with the areas of interest highlighted in yellow. 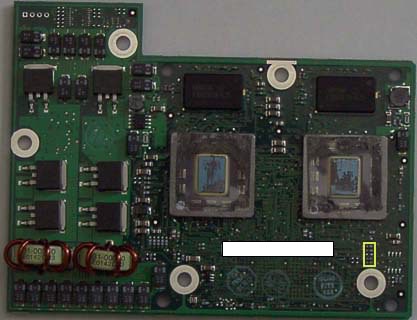 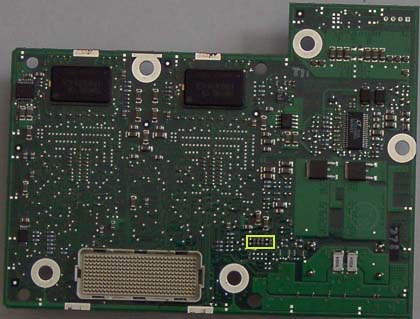 There are two sets of these resistors; each set controls one processor. The resistors are CFG_EXT and CFG_PLL[0:3]. The following table outlines the presence (0) and absence (1) of the 1k Ohm (102) resistors on the pads on the daughtercard for the relevant configurations.

There are no markings on the motherboard, so the figure below of the top of the daughtercard contains the necessary labels to the right of the pads. This is an image of the board after it was configured for the 1200 MHz configuration. 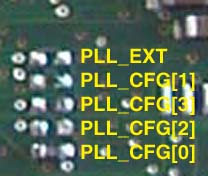 The figure below of the bottom of the daughtercard contains the necessary labels to the right of the pads. This is an image of the board after it was configured for the 1200 MHz configuration. 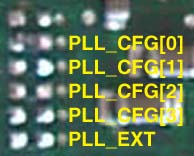 Take a look at Apple System Profiler; it should show 1200 MHz under the System Profile in the Hardware Overview section as shown below for both OS9 and OSX respectively.

OSX is new to me, so I don't know of many native benchmarking programs yet. Here are the benchmarks I am familiar with. If you have any benchmarks you would like me to run, drop me a line (schrier@mac.com).

MacBench 5 clearly shows a 20 % speedup with the modification to 1200 MHz.

I received a copy of TestbenchX after performing the modification, so I only have data for my machine on the 1.2 GHz configuration, but I also have 1 GHz info from a fellow Mac user. 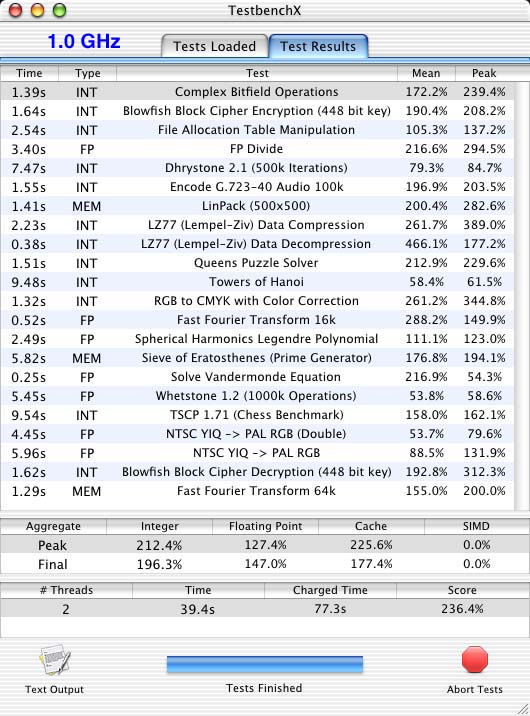 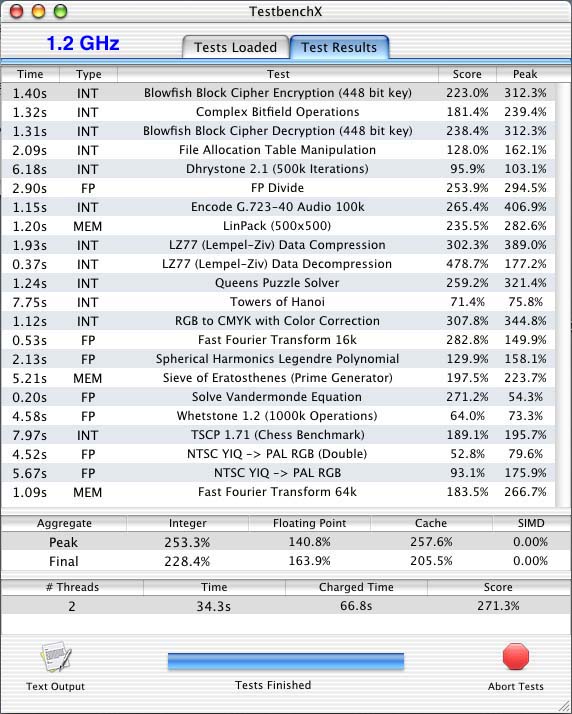 I received a copy of POV-Ray 3.1g.r2 after performing the modification, so I only have data on my machine for the 1.2 GHz configuration. Apparently the OS 9 version only uses a single processor. A fellow Mac user is looking into porting the linux application so we can give it a spin.

The resistors can be removed very quickly with two soldering irons; it probably takes me 1-2 seconds to remove them. I'm confident this will not overheat the daughtercard. If the resistor sticks to one of the soldering irons it may overheat and be damaged. If you damage a resistor, or want a spare one before you start, you can Join the Resistance! by sending a Self Addressed Stamped Envelope to Output Enablers, and we will send you a 1k Ohm (102) surface mount resistor for free.
So far I've had no problems. I've had the machine on for a max of about 10 hours straight, and no crashes yet in either OS.
I have not yet tried the 1330 MHz configuration.
I have not yet explored bus frequency or core voltage modifications.
I will likely try some other thermally conductive pastes to increase thermal conductivity.
I have not yet monitored the increase in processor temperatures, but will soon hook up a thermocouple to the heatsink above the processors.
If you've slowed down your fans to make your machine quiet (How I Reduced Fan Noise in my G4 Tower, Info on Quieter fans for G4 Towers, How I Reduced Fan Noise in a Quicksilver G4 Tower, How I Reduced Fan Noise in a Quicksilver G4 Tower: Part 2, and More Examples of Quicksilver G4 Fan Noise Reduction Mods on the Accelerate Your Mac! Web Page), keep a close eye on things; you may want to undo it for now.

So far I have not heard from many people who tried the mod, but two people failed at 1200 MHz, but are now running at 1066 MHz without any problems.