To rapidly pop a lot of popcorn!

We did some preliminary testing on a small scale, and observed that the oil began to smoke at around 260 C, and that the temperature drop upon the addition of the kernels would be dramatic (it dropped to 120 C) and that a large thermal mass would need to be heated along with the oil to maintain the oil above the critical popping temperature. 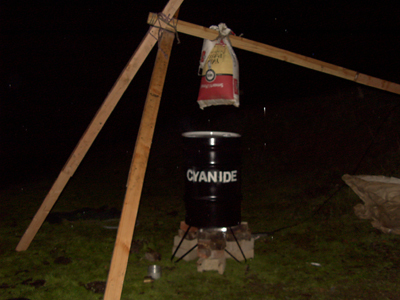 This is the setup we settled on for the first full-scale test. The wood structure (as prepared by Simon) held the 50 pound bag of popcorn kernels over the 30 gallon drum, and allowed us to shoot the bag so the kernels would fall into the hot oil. The drum contained 9 gallons of soybean oil and about 220 pounds of steel as an added thermal mass. The drum was resting on brick supports over a turkey deep fryer attached to a propane tank residing a safe 20 feet away. After the oil was heated for about an hour and was beginning to smoke, the bags were moved into place, and the drum lid was removed for the experiment. Oh, don't worry about the "CYANIDE"; that's just Phillips humor. 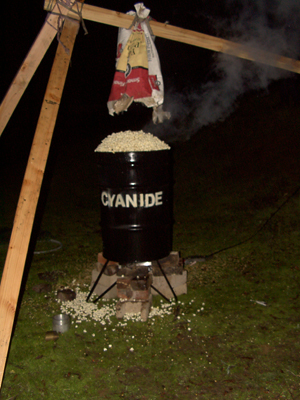 While the plan was for this to be a pinata-style event, a single shotgun blast from 25 yards with a slug caused the bag to split along the bottom and dump the load. While a lot of popcorn popped, we later learned that a lot also did not pop because of the way the thermal masses were placed. I'm sure we can dramatically increase our yields next time when we will also be sure to have a battery operated temperature readout attached to an internal thermocouple (or several long extension cords). 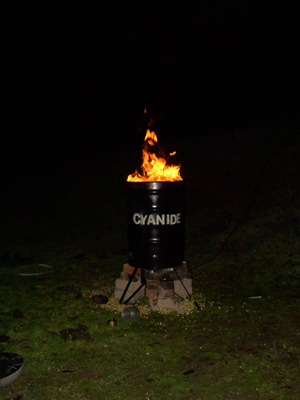 To our surprise, about an hour after it popped, and we had turned off the propane, the popcorn (not the oil) caught fire. Fortunately we were already full of popcorn, so some quick work with the lid smothered the fire.

Next time we'll remember to bring the salt!