Several months ago I stumbled on to the"Clock Chipping Home Page" under Hardware, (other sites) at The ULTIMATE Macintosh. Since then I have been experimenting with my Performa 6400/180. I thank Marc and everyone else for the excellent information posted at the Clock Chipping Home Page, The 6400 Zone,, Bare Feats, and Accelerate Your Mac and the millions of other places I have searched. For the price of a few crystals from Output Enablers, and yes $7 for a fan, I have jacked my Performa 6400/180 from the base, (40 MHz bus / 180 MHz processor,) to a much faster, (50 MHz bus / 225 MHz machine).

I have tried all combinations of Multiplier settings and Bus speeds, and MacBench 5.0 and my personal experience, have proven to me, that increasing the bus speed is the best way to go. By increasing the multiplier setting the processor at 220 or even 240 MHz still has to flow through the 40 MHz bus. It processes faster, but is still carried at the slow bus speed. By changing the bus crystal you can increase both the bus and processor speed and allow the information to travel faster everywhere. Faster in /Faster process/ Faster out. More Speed, More Reliable!

Performa 6400/180, 32 megs RAM, no level 2 cache, and no accelerators. I can only use FPM DRAM and not EDO. I ran these test on a pretty much basic board to cut down on the variables. I wanted to see what the Processor and Bus were actually doing with out the help of accelerators or cards. 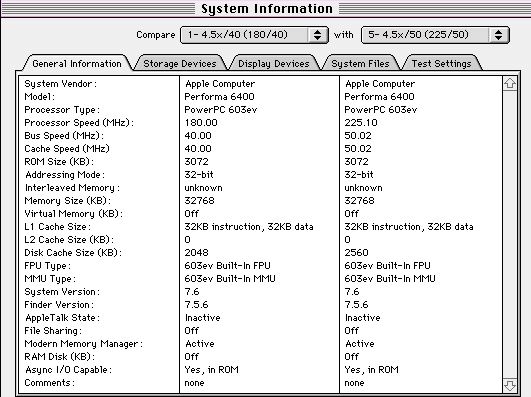 I have installed a home made "quick change block" for the Clock Multiplier settings. Also, thanks to Marc and Output Enablers, I soldered in a socket to change crystals easily. I tested crystals ranging from 30 MHz to 75 MHz. My printer, scanner, Zip, and Camera all work fine at any of the settings. Only the speed that it all happens is affected.

Here is a chart from MacBench 5.0 showing the most significant tests. 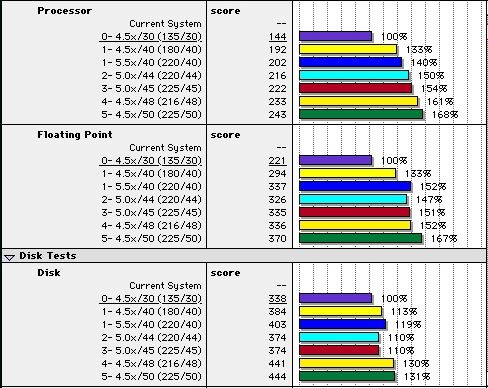 All of these results are from my Mac: The only tests I could find for comparison were done with MacBench 4.0

Test (0) shows the Multiplier at 4.5x, the bus crystal at 30, the Processor at 135. (all the test descriptions follow this pattern)

Thanks again to all of you, for all the great information. I will continue to test, and try to keep you posted,

* Has anyone experimented with anything beside the motherboard, such as Modems or DRAM?